The Somewhat Phony, But Still Bloody War In The Donbass – TTG 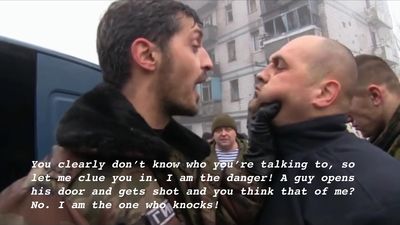 The frontline between the Ukrainian Army and the Novorossiyan Army has been static since the imposition of a truce after the signing of the Minsk-2 protocols in February 2015. That does not mean it’s been quiet. The Minsk-2 protocols called for the removal of heavy weapons from the front lines. That was happening, but now both sides are moving many of these weapons back to the front. I've been waiting for months for this sitzkrieg to boil over into something more dynamic. The fighting has been almost constant with mortar/artillery duels and small arms battles daily. This British Channel 4 News video and these sound recordings of fighting at Avdeevka and Peski paint a good picture of fighting in the Donbass.

Many of the Ukrainian bombardments still target civilian areas. Some things never change. However, the civilian infrastructure and the situation of the people of Novorossiya seems to be slowly improving since the imposition of Minsk-2. New housing is being built and old housing is being repaired. New shopping centers are opening and there are goods on the shelves. Agricultural production is now higher than before the Maidan coup. On the other hand, things for the Ukrainians seem to be getting worse each day. I keep thinking something's going to give any day, but it never does. I'm still waiting for it to blow up one way or another.

Kiev is still adamant that they have been fighting the Russian Army from the start. U.S. and various NATO mouthpieces have echoed this line without question. I haven’t heard any U.S. Intelligence source make such a claim. I believe a few have said just the opposite, but those reports were quickly stifled by the Borg media. I seriously doubt there are any Russian conventional units in the Donbass or ever have been. I've seen no convincing evidence of Russian troops in the area. Although I have seen no proof of it, I would imagine that some Russian Spetsnaz recon teams were in Ukraine and may still be there using Novorossiyan rebel cover.

We've seen what the Russians can do with a Syrian Army on brink of defeat. I have no doubt they can do more with an advising, training and equipping strategy with the ethnic Russians, most with Russian military training, on their own border. Syria was proof that the Russians are damned good at this. And it adds to my conviction that no Russian troop units are in Novorossiya. The Russians have continued to train and advise the Novorossiyan forces over the past year. Reorganization efforts are concentrating on forming battalion tactical groups (BTG) on the Russian model. These BTGs are capable of independent action as well as operating as part of larger brigade formations. They seem to have a higher ratio of fire support to maneuver elements than our  battalion task forces. I am impressed by this concept. This “South Front“ article from last August describes some of the other changes occurring in Novorossiya’s Army.

Where will all this lead? Will full scale fighting erupt again? That vile, neo-nazi cabal in Kiev may yet collapse. Yesterday’s Dutch referendum “no” vote on the EU association treaty with Ukraine may hasten that collapse. If a collapse is imminent, I can see Kiev launching an all out assault on the rebels in desperation. If that happens, I believe Putin will continue to support the Novorossiyan defense, although that support will not extend to marching on Kiev. Putin still prefers a political solution.

If Kiev does feel froggy enough to jump, I believe they will have their neo-nazi asses handed to them by the Novorossiyan forces. This time, I doubt Kiev will be saved by a Minsk-3 agreement. The lead photo is of Lieutenant Colonel Mikhail Tolstykh, AKA Givi, commander of the DNR Somali Battalion having a heated philisophical discussion (some called it torture) with the commander of the Ukrainian 93rd Guards Mechanized Brigade, Colonel Oleg Mikats on the occasion of his capture by Givi at the Donetsk Airport in January 2015. Mikats was also a ranking Pravy Sektor member. I found the quote from “Breaking Bad” to be most appropriate. If Kiev attacks, they will discover that it will be Givi and his fellow rebels who will be knocking.

This entry was posted in As The Borg Turns, Current Affairs, Russia, TTG, Ukraine Crisis. Bookmark the permalink.

70 Responses to The Somewhat Phony, But Still Bloody War In The Donbass – TTG