Going nuclear… power that is – TTG

Posted on December 16, 2019 by Andrei Martyanov 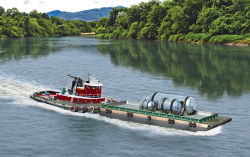 For the last 20 years, the future of nuclear power has stood in a high bay laboratory tucked away on the Oregon State University campus in the western part of the state. Operated by NuScale Power, an Oregon-based energy startup, this prototype reactor represents a new chapter in the conflict-ridden, politically bedeviled saga of nuclear power plants.

NuScale’s reactor won’t need massive cooling towers or sprawling emergency zones. It can be built in a factory and shipped to any location, no matter how remote. Extensive simulations suggest it can handle almost any emergency without a meltdown. One reason is that it barely uses any nuclear fuel, at least compared with existing reactors. It’s also a fraction of the size of its predecessors. (Wired)

This sounds promising. The complete NuScale reactor is the size of two school buses can can be transported in three pieces by barge, rail or highway. It reminds me of the Russian nuclear power barge Akademik Lomonosov now on station in the Russian Arctic… only better. That barge uses two nuclear ice breaker reactors to produce 70 MW of electricity. The NuScale reactor produces 60 MW. Ten NuScale reactors can be put in the footprint of a containment vessel of a standard current reactor, but what’s the point of that? They should be deployed to communities as decentralized power sources mitigating the need for long distance transmission lines.

Obviously even these small reactors are too much for the hard core global warming crowd. I don’t see why. I count myself as part of the “Laudato Si” crowd and I’m all for these reactors and their decentralized deployment. It beats coal and even natural gas. They are proven and more reliable than current renewables. Besides, the manufacture of photovoltaic cells and batteries is not all that green. Even so, I’m looking forward to VW’s new electric microbus.

37 Responses to Going nuclear… power that is – TTG