US Defense Secretary Ashton Carter has revealed himself to be the 21st century's answer to the original Dr. Strangelove.  Last week, while touring US nuclear weapons facilities, Carter threatened that the US was prepared to use nuclear weapons to defend against the new emerging Russian threat in Europe.  Carter held a press conference at Minot, North Dakota, with a B-52 in the background, pressing for a $1 trillion budget to modernize and expand the US nuclear arsenal to "catch up" with Russia.  In the meantime, the US is already moving ahead with a modernization of the B61-12 theater nuclear weapon, for deployment in Europe, that will blur the line between conventional and nuclear warfare, by increasing the accuracy and range and decreasing the payload.  No longer will the US nuclear arsenal in Europe be strictly a deterrent.

At the same time, the Obama Administration has walked away from the Geneva negotiations with Russia, aimed at ending the nearly six years of war in Syria, through a joint US-Russian effort against the main jihadist forces–Al Qaeda (Nusra Front) and ISIS.  On October 5, the Principals Committee huddled at the White House to consider three options for Syria:  Create a no-fly zone over all or most of the country; create safe zones along the Turkish and Jordanian borders inside Syrian territory; bomb the entire Syrian Air Force out of existence in a 24 hour display of "shock and awe;" or arm the Syrian rebels–ie. jihadists–with manpads and other anti-aircraft weapons as part of a prolonged insurgency directed against the Assad government, which will increasingly be dominated by the very terrorist forces that the US and Russia were jointly targeting up until this week.

As Col. Lang has been writing for months, the Russian President has finally concluded that the US is not sincere in proposing joint operations against the jihadists of ISIS and Al Qaeda, and so he has thrown his military support behind an assault on Aleppo, to wipe out the terrorist pocket and effectively defeat the insurgency militarily.

The first three options taken up by the Principals at the White House mean direct war against Russia, a war that would, in light of Strangelove Carter's recent remarks, likely lead to a nuclear exchange–and not at the tactical level.  Option four means the US is aligned with the jihadists in a prolonged, ie. permanent war in the Near East–hardly a much better option. 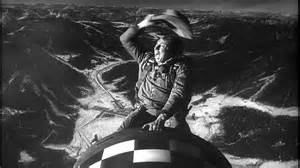 This entry was posted in As The Borg Turns, Borg Wars, Current Affairs, Russia, Saudi Arabia, Syria. Bookmark the permalink.