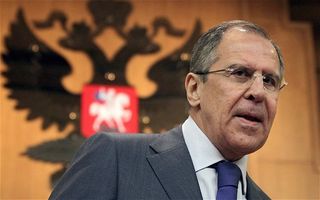 "Lavrov said the material does not include guarantees that it meets the requirements of the Organization for the Prohibition of Chemical Weapons. He said the organization specifies that samples taken from blood, urine and clothing can be considered reliable evidence only if supervised by organization experts from the time they are taken up to delivery to a laboratory.
The OPCW is the autonomous body for implementing the international Chemical Weapons Convention that went into effect in 1997. Its website says Syria is one of six countries that have not signed or acceded to the convention.
"  ABC News

Translation:  In Russia's view the White House can not make
unsupported claims of Syrian government use of proscribed weapons without following the protocols explicit in the international treaty that proscribed them.  What is suggested by Lavrov's statement is that the Obama Administration, having decided to intervene in Syria has now unjustifiably claimed that it has proof of Syrian government guilt in the matter of Sarin gas use.  He implies that Russia will not accept such a procedure. pl

"There have been leaks from Western media regarding the serious consideration to create a no-fly zone over Syria through the deployment of Patriot anti-aircraft missiles and F-16 jets in Jordan," he said, speaking at a joint news conference with his Italian counterpart.
"You don't have to be a great expert to understand that this will violate international law." the Telegraph

This is a clear warning that Russia will veto an appeal for a UN resolution supporting US intervention in Syria.  Let's get real about what may happen.  Russia will veto.  the US may intervene anyway based on the approval of its "friends."  Might we end up in an armed confrontation with Russia over Syria?  Is that what we want?  Is that what the R2P and neocon crowd want?  pl

61 Responses to Russia objects to US policy shift on Syria