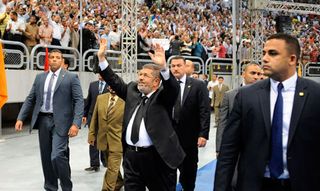 "The announcement that Egypt will sever all ties with Syria, made by President Mohamed Morsi while addressing thousands of Muslim Brotherhood members at Cairo Stadium Saturday night, reflects a decision made by the president against the advice of top bureaucratic aides, informed government sources say.
The decision was pronounced in the course of an otherwise fiery speech where the president in a high pitch insisted that “Hezbollah should leave Syria.”
It came in the wake of several activities among Islamist figures who underlined the need to support Sunni Syrians against Hezbollah and the Shia-offshoot regime. It also came back to back with a US announcement that it will provide arms for Syrian groups who are fighting — alongside foreign jihadis — to remove the Alawite regime of Bashar Al-Assad"  Al-Ahram

The Mursi "cat' is ever more open about the pattern of his "spots."  I understand that his popularity rating is now down in the 20s.  This injection of Sunni radical Islamism into Egyptian national policy will undoubtedly be good news in the White House where support from Erdogan's government seems increasingly unlikely. and local allies are needed for the decision to intervene.  Jordan is a likely loser in all this.  Abdullah's ability to keep the Jordanian political ship on an even keel while managing all those refugees and serving as an American "aircraft carrier" is doubtful.  pl