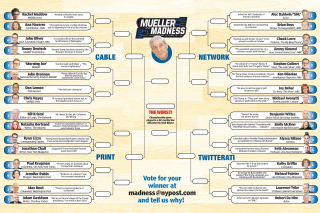 " …  Wittes is followed, in the second spot, by Harvard Law Professor Laurence Tribe, who traded his stellar academic reputation for anti-Trump crankery. In July 2017, he tweeted that when senior Democrats say, “There is evidence of both collusion and obstruction, you can take that to the bank. Trump beware!” But Tribes’ collusion checks bounced.

Finally, there are the Network collusion peddlers. The top seed is Alec Baldwin. Baldwin’s cringey impersonations of a clueless, jail-bound Trump revived his battered career and kept hope alive for liberals and Trump haters across the land. Will he reprise the role now that Trump isn’t heading for jail or impeachment?

The second seed goes to Joy Behar, who confidently predicted that Trump is “going to end up in prison.” The live audience at “The View” cheered. They should ­demand a refund."  NY Post

Donna Brasile, somehow now of Foxnews, said today that the Dems believe that the Barr/Rosenstein letter to Congress should be read for its esoteric meaning rather than the plain text.  This seems reminiscent of the neocon/Leo Straussian view of Platonic textual exegesis.  Perhaps this is just coincidence.

The exoteric words of the Barr/Rosenstein letter state that evidence could not be found of treasonous conspiracy with the Russian government and obstruction of justice.  Pivoting off that, the Straussian/Brasile view is that Barr and Rosenstein were signalling that the hidden meaning in the text is that guilt can still be found in the data by the adepts now in charge of the House of Representatives.  All the world wonders!

There seem to be missing names in the Posts's chart above.  Where is Chris Matthews?  Where are Brennan, Clapper and Comey?

I told SWMBO the other day that Jimmy Clapper would quickly cave under pressure and seek to throw someone under the bus to save himself from the possibility of being expelled from USAF if eventually sentenced to confinement.  Flynn faces the same possibility.  Clapper would be a big prize for prosecutors from Barr's DoJ.  He was Director of National Intelligence, Obama's third or fourth choice, but, nevertheless…  Such a big prize would require a large substitute as a distraction "under the bus."

Soo … Jimmy the Clap has now stated on world TeeVee that Obama ordered him, Brennan and all the other Midgets on Horseback who headed the IC back then to make a study of Russian attempts at intervention in the election, and that this "study" led to a resolve to investigate Candidate Trump as a potential traitor and a Russian agent of influence.  pl

This entry was posted in government, Media, Politics, Russiagate. Bookmark the permalink.