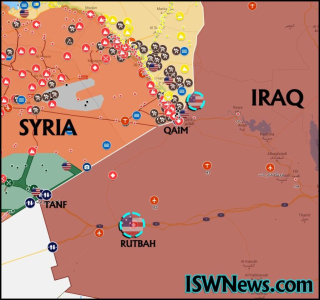 "The U.S. military has established two new bases along the Iraqi-Syrian border, the Turkish state-owned Anadolu Agency reported on Tuesday.

Citing an Iraqi official, the Anadolu Agency said the U.S. military established the two bases in the western countryside of the Al-Anbar.

The first base, he said, had been set up in the northern Rumana subdistrict (in Anbar’s Al-Qaim district) near the Syrian border, roughly 360 kilometers west of provincial capital Ramadi.

The second base, he added, had been set up east of the city of Al-Rutbah, roughly 310 kilometers west of Ramadi and less than 100 kilometers from the Syrian border.

According to al-Duleimi, the twin bases are intended to help Iraqi forces “secure the country’s borders and prevent infiltrations by the Daesh terrorist group.”

“Scores of U.S. soldiers are currently stationed at the two bases, along with drones and other equipment,” al-Duleimi said without elaborating."

The generals' club is probably at work in this, seeking to limit the effect of Trump's order for US forces to withdraw from Syria.

The one in roumana sub-district  is the location from which US Army 155mm artillery is firing in support of continuing  SDF attacks against the hajin pocket in the SE corner of Syria.  There will be US Army GBs with the SDF adjusting these fires.  IMO those GBs will be left in Syria to do what only they do best, keep the locals in the fight.  This base will be useful as a forward staging point for any raids that SOF forces might want to make into Syria (kill Baghdadi, etc.)

The other base is at rutbah and is positioned astride the highway from al-tanf in Syria.  In this position it will continue to obstruct the Damascus-Baghdad-Iran main ground route.

These two facilities will surely be supported and supplied from the al-asad air bast which Trump visited.  pl

This entry was posted in As The Borg Turns, Borg Wars, Middle East, Syria, Turkey. Bookmark the permalink.