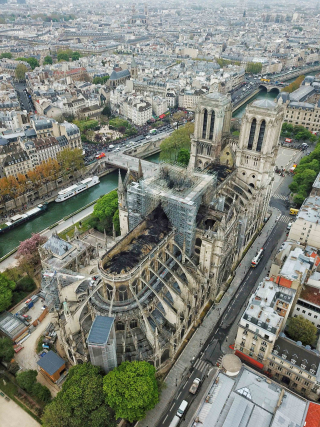 "A gutted roof, blackened stone and a gaping hole where the spire once stood.

The scale of the damage caused by a devastating fire that tore through Notre Dame cathedral on Monday has been revealed by dramatic images shot from a drone above the 850-year-old church.

The pictures, taken by Lana Sator, show the interior of the medieval Catholic church exposed to the elements, and the impact caused by the dramatic collapse of the structure's spire.

French President Emmanuel Macron has pledged to rebuild the cathedral, one of Paris' most-famous landmarks."  CNN

The miracle of what remains is astonishing.  Those who criticize les pompiers de Paris are just bitching against brave men and women who did their best.

The flying buttresses held under all that pressure from heat and stone expansion.  What a marvelous thing!  The Rose windows survived!  Another miracle!

And then there was the hero priest, the chaplain of the firemen, who led some of his flock into the burning medieval building with tons of dried wood above them to save holy relics but most importantly for them the consecrated Host from the altar.  We Catholics believe that the consecrated Host is the actual Body of Christ transformed at the Consecration through trans-substantiation.  To die in the attempt to save that was surely to be saved.

And then there was the spectacle of so many young French people gathered in the streets to mourn and sing the praises of Jesus' mother for whom the cathedral is named.

This was nothing like defeat for France and her remaining Christian people. No, it was a moment of renewed hope.  pl

This entry was posted in Current Affairs, France, Religion. Bookmark the permalink.