“We come in peace.” Really? 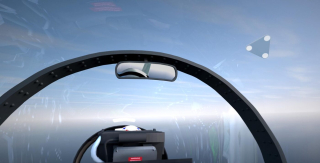 "Overwhelmingly, everyone The Debrief spoke with said the most striking feature of the recently released UAPTF intelligence position report was the inclusion of new and “extremely clear” photograph of an unidentifiable triangular aircraft.

The photograph, which is said to have also been taken from inside the cockpit of a military fighter jet, depicted an apparent aerospace vehicle described as a large equilateral triangle with rounded or “blunted” edges and large, perfectly spherical white “lights” in each corner. Officials who had seen it said the image was captured in 2019 by an F/A-18 fighter pilot.

Two officials that received the report said the photo was taken after the triangular craft emerged from the ocean and began to ascend straight upwards at a 90-degree angle. It was indicated that this event occurred off the eastern coast of the United States. Several other sources confirmed the photo’s existence; however, they declined to provide any further specifics of the incident.

Regarding the overall theme of the recent report, officials who read it say the report primarily focused on “Unidentified Submersible Phenomena,” or unidentified “transmedium” vehicles capable of operating both under water and in the air. "  the debrief

I am surprised by people who are so intellectually limited that they insist that UFO/UAP cannot be real.  Dana Perino, the cute blonde midget who is a talking head on Foxnews says that she not only "thinks" there is nothing but us in the great, wide universe but that she believes the whole US Space Program has been a waste of time and money from its very inception in the era of the godlike JFK except as it was a useful tool with which to tweak the Soviets.

Now, the generals and admirals, a notably unimaginative lot, are slowly coming to a consensus with regard to UFO/UAP and that consensus points to a conclusion of the reality of these things, whatever they are.  pl

This entry was posted in Space. Bookmark the permalink.