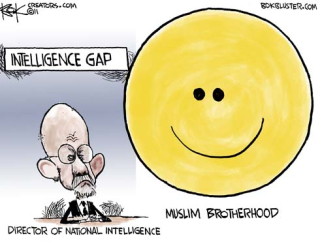 ""I was amazed at that and rather disappointed that the attorney general would say such a thing,” Clapper said. “The term 'spying' has all kinds of negative connotations and I have to believe he chose that term deliberately.”

Clapper conceded this point following a May 2 story in the New York Times that revealed that a woman who had been posing as the assistant of Stefan Halper, a Cambridge University professor who himself had worked as a Trump campaign informant on behalf of the FBI, was herself working undercover for the FBI. Going by the alias Azra Turk, this yet-unknown woman was reportedly sent to meet with Papadopoulos by one of the FBI agents who had previously spoken at Halper’s Cambridge Intelligence Seminars."  Washington Examiner

I have suggested before that Clapper and the FISA court judges are the weakest spots in the array of Russiagate conspirators.

The FISA judges are suggested to the Chief Justice by the DoJ for appointment.  This occurs after close vetting for probable compliance with anything communicated by DoJ as desired outcomes in cases brought to them.  After all, who knows them better than the DoJ lawyers who argue in the courts they come from?

Clapper is a weakling filled boundless ambition and handicapped by limited intelligence.  He has no particular allegiance to anything or anyone except himself and will seek forgiveness for his misdeeds if pressed hard.

If Lindsay Graham needs initial targets for his very own "witchhunt," he should start with these people.  pl

This entry was posted in government, Intelligence, Politics. Bookmark the permalink.