Clapper “cherry-picked” for his “assessment” on Syria 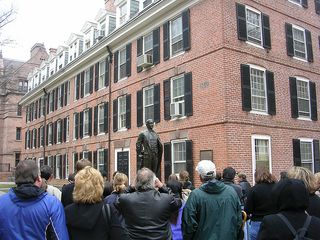 Nathan Hale told the British soldier who put the noose around his neck that he regretted that he had but one life to give for his country.  A statue of Hale standing with his hands tied behind him is placed in front of the old building at CIA headquarters as well as this one at Yale.

According to Porter, Clapper "cherry-picked" across the IC to find bits and pieces of opinion and "data" with which to construct a document that he then did not sign.  This is why the document was issued by the WH press office rather than as an IC assessment.
Perhasps he has some fear of the judgment of history.

This procedure of constructing public "reality" through control of the narrative is identical to that followed by the Iraq Group in Cheney's White House and the Office of Special Plans in Rumsfeld's office.  The level of contempt displayed for the citizenry is equal to that of the Bush Administration.

We are coming to the end of the Republic that our fathers built.  The Principate approaches.  pl

This entry was posted in Current Affairs, Intelligence, Syria. Bookmark the permalink.

70 Responses to Clapper “cherry-picked” for his “assessment” on Syria