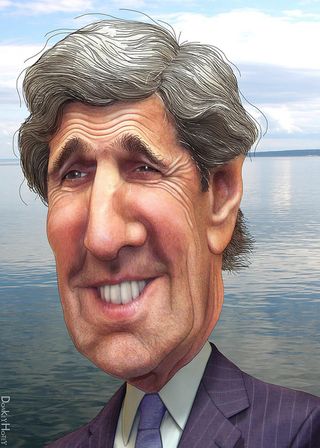 "Putin recalled watching a congressional debate where Kerry was asked about al-Qaida. Putin said he had denied that it was operating in Syria, even though he was aware of the al-Qaida-linked Jabhat al-Nusra group.
Putin said: "This was very unpleasant and surprising for me. We talk to them (the Americans) and we assume they are decent people, but he is lying and he knows that he is lying. This is sad."
It was unclear exactly what Putin was referencing, but Kerry was asked Tuesday while testifying before the Senate Foreign Relations Committee if the Syrian opposition had become more infiltrated by al-Qaida.
Kerry responded that that was "basically incorrect" and that the opposition has "increasingly become more defined by its moderation."
"  SF Gate

It seems to me that it is well established that both ISIS and al-Nusra are AQ clones.  Kerry and the other administration henchpersons are attempting to convince that the somewhat secular but nevertheless altogether Sunni Free Syrian Army is the strongest of the rebel factions and the most likely to take control of Syria if the government falls.

Is this an article of faith, or is there actually some indication that Kerry might be correct?

And then of course there was the moment before the senate when Kerry said that he did not want to exclude a future possibility of US ground troops in Syria.  What was that about?  pl