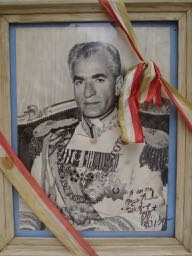 The genesis of this article stems directly from Richard Sale’s recent piece on his experiences in pre and post revolutionary Iran. It reminded me of an artifact I kept from my days in ODA 334, 10th Special Forces then stationed at Fort Devens, Massachusetts. It is a worn and stained framed photo portrait print of the Shah of Iran. It’s decorated with an even more worn and stained ribbon in the Iranian national colors. A handwritten inscription in the corner reads, “To ODA 334, Many thanks and my deep respect. Pahlavi, Shah of Iran.” This was presented to the team after the completion of an MTT (mobile training team) deployment to Iran in the 1960s long before my or any of my team mates’ time in ODA 334.

That portrait and Richard’s article set me on a quest for more information about 10th Group’s connection to Iran. ODA 334’s deployment occurred in the early to mid 60s when the entire Group was still stationed at Bad Toelz, Germany. Four ODAs conducted MTTs to train the Iranian special forces over a two year period under a MAAG Iran (Military Assistance Advisory Group) program. 10th Group MTTs also trained Iranian Kurd fighters in the northern mountains as part of this MAAG program.

Fortuitously I found a documentary produced by the US Army Signal Corps Army Pictorial Service as an episode in their “The Big Picture” weekly television series. This episode, entitled “Assignment Iran,” chronicles the journey of Captain Paul Wineman, US Army Signal Corps, as he makes his way through the Special Forces Officers Course at Fort Bragg and the Defense Language Institute in Monterey before beginning his two year assignment with MAAG Iran to oversee the program to help the Iranian Army train a special forces group of its own. Watch the documentary. You will not only learn about this fascinating episode in US-Iranian military history, but you will also learn a great deal about the essence of our Green Berets.

The Iranian unit trained and the special forces school established by these 10th Group MTTs seem to have absorbed this Green Beret essence. This is the 65th Airborne Special Forces Brigade, a unit that has endured through the Iranian Revolution, the Iran-Iraq War and has sent its advisors to augment the IRGC advise and assist mission in Syria since 2016. The 65th NOHED Brigade (Farsi acronym  for airborne special forces) retains their rifle green berets. Their pre-Revolution insignia was very similar to the US Special Forces crest with its crossed arrows and dagger. The Brigade’s present day insignia retains those elements. They are not just commandos. The Brigade has sub-units dedicated to hostage rescue, psychological operations and UW (unconventional warfare). I found a YouTube video from 2017 with commentary from a 65th Brigade colonel and the daily activities of a captain and his troops from the Brigade. The video is in Farsi with no subtitles, but I found that captain and his troops' activities to be quite similar to my and my team's experiences at Fort Devens in the 80s… brothers in arms. Whether you understand Farsi or not, watch this video as well. If Babak or any other member of our committee of correspondence can provide some translation notes, I would be most appreciative.

As a Green Beret, I’ve had the privilege of working with the Incursore of the Italian 9th Parachute Assault Regiment, the Legionnaires of the French 2nd Foreign Parachute Regiment and my brave brothers of the Lebanese 8th Infantry Brigade. Such experiences allow the mind of the simple soldier to transcend the pettiness of politics and the corrosiveness of nativism. In 2012, the 10th Group and the Russian 45th Guards Independent Reconnaissance Brigade (Spetsnaz) conducted joint training exercises in the US and Russia. Perhaps some day, that exchange can continue and the 10th Group and the 65th Brigade can do the same. What if they meet on the Euphrates? NOHED, Spetsnaz and Green Berets exchanging handshakes? Wouldn't that be a hoot?

I hope others here find this as fascinating as I do. I would very much like to continue the discussion about our and Iran’s Green Berets. DOL

http://www.hamandishi.ir/news/242426/  (An article in Farsi published on 26 May 2018 largely consisting of an interview with the commander of the 65th NOHED Brigade. Run it through Google Translate to get the gist of it. There is a wealth of information there, even for us Farsi illiterates. Perhaps Babak can provide some nuanced comments.)

This entry was posted in History, Iran, The Military Art, TTG. Bookmark the permalink.