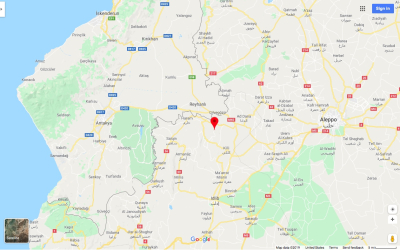 The first indications that something unusual was going on in Idlib was a series of tweets from @WithinSyriaBlog late last night. I saw this before I saw Trump’s tweet of “Something very big has just happened!”

Summary of what is going on west the town of Barisha in northern Idlib, this thread will be updated:

2:58 PM – 26 Oct 2019
1- Eight helicopters came from the direction of Turkish border, began conducting strikes on targets west of the town of Barisha. Warplanes and UAVs are covering the helicopters.
2-Local sources denied that the helicopters carried out the strikes in response to AA fire. The attack was apparently planned, well planned.
3-At least two of the eight helicopters landed west of Barisha. However, it is unclear if a some special operation is being carried out there now.
4-Additional 4 helicopters joined the force around 15 min into the attack. At least 12 helicopters are now operating west of Barisha.
5-Local sources are talking about an operation to capture or kill a senior Jihadi figure. Unconfirmed reports says that at least one TIP militants has been killed, so far.

This morning President Trump addressed the nation and announced the killing of Abu Bakr al—Baghdadi by US Special Operations Forces. I’m sure most of us either watched this or heard of it by now. More details will surely come out over the next few days. Hopefully not a lot more. Here’s a few details that I find interesting.

1 – A Squadron, SFOD Delta was the primary assault force. A Delta squadron consists of two assault troops and one reconnaissance troop. This may sound like a lot but in my experience a special operations squadron often consists of less than fifty troops. The operation was probably supported by some number of Rangers. That’s a common method of operation.

2 – Photos of 30mm HEDP shells from the raid area are now online. That indicates MH-60L helicopters from the 160th Special Operations Wing were providing support with their M230 chain guns.

3 – Time line for the operation was givens as one hour, ten minutes in, two hours on the ground and one hour, ten minutes out. They could have flown from Incirlik Air Force Base, but I think they flew from the Abraham Lincoln Carrier Battle Group in the Mediterranean. It would have been more secure and would account for more “nap-of-the-earth” flying time across the hills and mountains of Hatay Province.

4 – Barisha is located in Idlib Governorate north of Idlib and west of Aleppo very close to the the major crossing point into Turkey. What was Baghdadi doing there? Barisha is the headquarters of Huras Din. Huras Din was created last February, mainly from senior Non-Syrian members of Hayet Tahrir Sham, HTS (created from Al-Qaida in 2016). It was HTS that provided security for Turkey while setting up its twelve observation posts. This area is critical to both Turkey’s and the jihadi’s goal of retaining control of Idlib. Again, what was Baghdadi doing there?

5 – Vice President Pence said this morning that we had intelligence of Baghdadi’s location earlier last week and more a specific location only Saturday morning.   Did Turkey provide this information? I doubt it. Russia and the SAA have been running reconnaissance and spying missions throughout Idlib for quite a while. Between those missions and R+6 SIGINT, I think Russia provided critical information to USI in the lead up to this raid. The coordination between the US and Russia was probably a lot more that just informing them that we were coming in as Trump said in his address this morning.

This entry was posted in Intelligence, Russia, Syria, The Military Art, TTG. Bookmark the permalink.