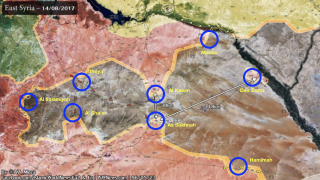 “BEIRUT, LEBANON (1:15 P.M.) – The Syrian Arab Army (SAA) has officially halted their field operations in the southeastern countryside of the Al-Raqqa Governorate after more than 7 weeks of being on the offensive against the Islamic State (ISIL).

According to a military source, the Syrian Arab Army’s Tiger Forces have been ordered to halt their advance on Deir Ezzor until the Islamic State’s pocket in central Syria is fully cleared.

The Tiger Forces will now concentrate on the Hama Governorate, where many of their units are currently awaiting orders to storm the strategic town of ‘Uqayrbat.

‘Uqayrbat is considered the most important town under the Islamic State’s control because it is located along several roadways that flow through the Al-Raqqa and Homs governorates.”  (Al Masdar News)

Cauldron, kessel, pocket, motti or encirclement, call them what you will, but the major jihadi salient in central Syria is about to become two major jihadi cauldrons. That appears to have been the foremost military objective of R+6 forces for several weeks. Yesterday’s announcement makes it official.

The Tiger Forces drive to the Euphrates from Aleppo, started so long ago, was a critical and necessary move to reduce the IS salient along the Homs-Hama governorate border. It created the conditions for the imminent creation of two cauldrons where a salient once existed. Another move that was critical was the constant R+6 pressure all along this front. Note on the above map that every blue circle represents a sustained offensive action by the R+6, even at Deir Ezzor. These widespread offensive actions prevented the IS forces from concentrating at a place of their choosing to seize the initiative.

As I write this, the SAA has managed to either close the gap or come within five kilometers of closing the gap between the Ithriya and Al Sha’er advances, thus creating the first of the cauldrons. This has already been called the Uqayribat pocket. The Tiger Forces are continuing to press southwards from Al Kawm. It is this advance that I find most interesting and most telling about the future of the SAA.

In the early morning hours of 12 August, Brigadier General Suheil al-Hassan was preparing a company-sized assault force of the Special Airborne Force for a night airmobile assault some twenty kilometers behind IS lines. This Special Airborne force is not part of Hassan’s Tiger Forces. Before the recent unpleasantness in Syria began, they were primarily used for defense of airports but had a great deal of training in urban warfare and counter insurgency. Suheil served as a paratrooper and commander in this unit before forming the Tigers.

Suheil al-Hassan personally led this assault force on this mission. He was seen exhorting his troops on the tarmac wearing a load bearing equipment vest, a helmet with night vision goggles and an AK with night sight under his arm. His troops were also lightly armed with a basic load of ammunition for their small arms, many carried what appear to a LAW-type launcher slung across their backs. The lightness of their loads were apparent as they ran and jumped up into the Mi-8 helicopter transports. I also note the rear doors of the Hips were removed remnicent of those Hueys in the 25th Infantry Division. I didn’t know they had doors until I got back to Benning.

The operation began with a “fire attack” of multiple rocket launchers (MLRS) followed by an aerial assault by Ka-52 Alligators. The Alligators also adjusted MLRS fire. Then four Hips brought in Suheil’s men landing near the settlements of Khirbet Mikman and Al Kadir. They moved along a dry river bed to take a commanding hill and assaulted the village of Al Kadir. Suheil’s men took an IS headquarters and several depots. Suheil and his men held these positions until Tiger Forces advanced to relieve them later in the morning of 12 August. The IS lost over thirty of its fighters, three tanks, seventeen armed tacticals and seven VBIEDs to destruction by the raiding force and a further two VBIEDs and several artillery pieces captured by Suheil’s men. There were no SAA casualties from this entire operation.

The Tiger Forces did not stop there. By nightfall on 14 August, they advanced another twenty kilometers seizing the entire Al Kawm area. The IS retreated to Taybah, the last town between the Tiger Forces and their SAA brethren at Al Sukhnah. The Tiger Forces have since taken Mount Minshar, the high ground overlooking Taybah. I do not know whether the SAA prefers to close this cauldron as soon as possible or leave a small gap to entice IS to attempt a withdrawal. This narrow gauntlet covered by R+6 fire attacks with artillery and MLRS and round the clock predations by Syrian and Russian air attacks could be a very effective meat grinder.

The future of IS in Syria is becoming clear. They are sure to put up a spirited resistance along the Euphrates, but they will never take Deir Ezzor. They will dissolve into a stateless, but still dangerous, underground resistance. The R+6 will keep the pressure on, probably quite brutally, until IS is no more than angry men in a few mosques.

The SAA, with Russian assistance, will become a motivated, well trained and equipped force capable of daring and imaginative combined arms operations. It will be regularly train with Iranian and Hezbollah units and will be a great source of ulcers among the Israeli Defense Force. When the Syrian Air Force eventually reaches maturity, those Israeli ulcers will bleed without stop. The political geography of the Mideast is about to change.

This entry was posted in Borg Wars, Syria, The Military Art, TTG. Bookmark the permalink.