Manning gets a DD and 35 years. 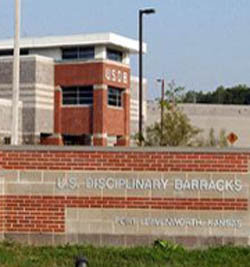 Some of you couldn't handle the idea of your little friend Manning in jail with tattoed animals.  So I changed the picture.  Maybe you can deal with the USDB at Fort Leavenworth where he will be.

"Manning, 25, will be dishonorably discharged from the U.S. military and forfeit some pay, Lind said. His rank will be reduced to private from private first class.
Manning would be eligible for parole after serving one-third of his sentence, which will be reduced by the time he has already served in prison plus 112 days.
Wearing his dress uniform, the slightly built Manning stood at attention as the sentence was read, seeming to show no emotion. As he was escorted out of the courtroom, supporters shouted "Bradley, we are with you."
Elizabeth Goitein, co-director of the Liberty and National Security Program at the Brennan Center for Justice, called the sentence "unprecedented" in its magnitude.
"It's more than 17 times the next longest sentence ever served" for providing secret material to the media, Goitein said. "It is in line with sentences for paid espionage for the enemy.""  Reuters

IMO this is a lenient sentence.  He could have been shot for treason and/or espionage.  The sentence is subject to review by the convening authority, then to appeal by an appellate court and SCOTUS, but IMO this will stick.

The part of the sentence that allows parole after 1/3 of the sentence has been served surprises me.  I thought he would get 20 years without parole.  The Dishonorable Discharge is something that civilians will not understand in its importance.  It is a handicap that will follow him around for the rest of his life.

He will serve his sentence as a military prisoner.  Hopefully he will never be allowed to wear the uniform again.  This wiould be a relief to many, especially in the Military Intelligence Regiment and the 10th Mountain Division whose insignia he has disgraced.  pl

This entry was posted in Current Affairs, Justice. Bookmark the permalink.

80 Responses to Manning gets a DD and 35 years.