Spengler on American ineptitude in Egypt 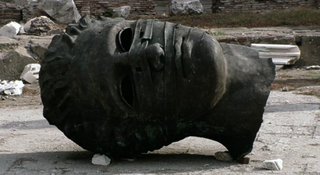 "America's whimsical attitude towards Egypt is not a blunder but rather a catastrophic institutional failure. President Obama has surrounded himself with a camarilla, with Susan Rice as National Security Advisor, flanked by Valerie Jarrett, the Iranian-born public housing millionaire. Compared to Obama's team, Zbigniew Brzezinski was an intellectual colossus at Jimmy Carter's NSC. These are amateurs, and it is anyone's guess what they will do from one day to the next.
By default, Republican policy is defined by Senator John McCain, whom the head of Egypt's ruling National Salvation Party dismissed as a "senile old man" after the senator's last visit to Cairo. McCain's belief in Egyptian democracy is echoed by a few high-profile Republican pundits, for example, Reuel Marc Gerecht, Robert Kagan, and Max Boot. Most of the Republican foreign policy community disagrees."  Spengler

SWMBO often says that we were lucky to have lived and served in the period of America's greatness and indeed grandeur.  She is correct.

The United States, IMO. has declined politically, institutionally, morally, and ethically with a rapidity that is hard to find mirrored in history.  It is now a national security state obsessed and afflicted with the malignancy of Orwellian "virtue" over issues of political correctness that have little to do with real life in a hostile world.  So few Americans are willing to serve in the armed forces that "thank you for your servce" has become even more of a mockery than it was before 9/11.  The suicide rate is high in the armed forces?  Consider that many of those who have not served in combat are the people who kill themselves.  Consider that over half of the reported sexual assaults in the armed forces are of men on men.  What sort of children are you raising?

The attempt to export American practice in political life is so absurd and self destructive as to merit the ridicule that Spengler heaps upon it.

64 Responses to Spengler on American ineptitude in Egypt