Do not believe a word you have heard from the Pentagon and the White House about the "success" of the cruise missile strikes on Friday last. A fraud is being perpetrated on the American people and the world at large. Frankly, General Mattis and General Dunford have dishonored themselves by going along with this charade.

If you could go to the CAOC (i.e., the Combined Air Operations Center) located at the Al Udeid Air Force Base in Qatar and speak to officers working for CENTCOM, you would hear a mixture of disgust, shock and anger from many over the President's claim of "Mission Accomplished." And I am talking about people who have been supportive of President Trump. But Trump, with the sycophants at the Pentagon and the Joint Staff, has crossed a line into delusional thinking.

(By the way, here's a picture of the CAOC courtesy of the US Air Force Central Command.) 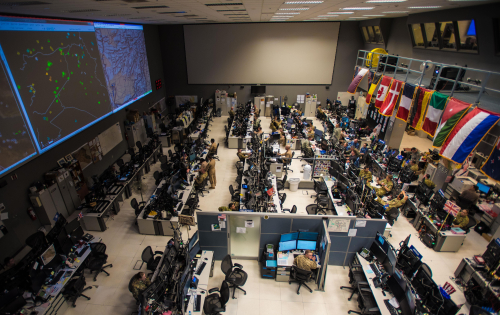 There are at least three sources–First, the United States fully coordinated and deconflicted the attack in Syria with the Russians; Second, well over 50% of the TLAMs launched by the United States, France and Britain were shot down by air defense systems in Syria; and Third, the pundits (like retired General Jack Keane) and politicians who are insisting foolishly that Russia is a second rate military power and won't hit back.

Let's start with the first issue of "coordination and deconfliction." We have been in daily contact with the Russians telling them where we are flying for almost three years. Who says so? The Associated Press:

A U.S.-led coalition has been bombing Islamic State-held territory across Syria, launching 24 strikes on Thursday alone, according to the U.S. military’s Central Command. The coalition includes some 60 countries, with some launching their own strikes into Syria. Russia is waging its own bombing campaign in support of President Bashar Assad’s forces, while the Syrian government has its own air force and air defense systems. That means a lot of aircraft are flying in a small airspace, which raises the danger for pilots. In November 2015, for instance, NATO member Turkey shot down a Russian jet fighter, nearly sparking an international conflagration.

WATCHING THE WAR FROM QATAR

To protect pilots, Moscow and Washington opened a so-called “deconfliction line” after Russia began its bombing campaign in September 2015. On the U.S. side, it is run out of the Combined Air and Space Operations Center at the vast al-Udeid Air Base in Qatar, which hosts the forward headquarters of U.S. Central Command. There, air traffic controllers and senior military officers are in contact with their Russian counterparts in Syria. They share coordinates and other data to avoid midair collisions or confrontations. One U.S. pilot flying missions over Syria credited his safety to it in a recent Associated Press interview .

With this background you can now appreciate how misleading and deceptive General Dunford, Chairman of the Joint Chiefs of Staff, was in answering the following question:

GEN. DUNFORD: Gordon, to be clear, the only — the only communications that took place specifically associated with this operation before the targets were struck was the normal deconfliction of the airspace, the procedures that are in place for all of our operations in Syria.

Russia was told where we were going to strike. Russia in turn warned the Syrians. Both the Syrians and the Russians evacuated key personnel and equipment from the target sites. Any claim by the United States that we caused devastating damage or destroyed essential capabilities is total fantasy.

The second issue concerns the imagined success of the U.S. TLAM strike. Before General Mattis (retired) approached the podium Friday night, he knew full well that a significant number of the inbound missiles had been shot down inside Syria. That is why Mattis closed his press conference with the following comment:

Based on recent experience, we fully expect a significant disinformation campaign over the coming days by those who have aligned themselves with the Assad regime.

Give the old boy his due. He was inoculating the ridiculous operation against legitimate criticism by simply being able to point out that any information contrary to what the Pentagon said was "propaganda." Of course, the enlisted and officers that staff the CAOC know differently. The Russians and Syrians were not lying when they claimed to have downed more than 70 of the U.S., UK and French missiles.

I understand the reluctance of the U.S. military leaders to admit the truth about this debacle. It would undermine the confidence of the American people is our supposedly invincible weapon systems and would embarrass and enrage the man child that inhabits the White House. Better to tell him lies and let him believe the fantasy. But this is a very dangerous game. So far the Russians have not pursued significant PR efforts to expose the U.S. lie about the missiles. Maybe they are choosing to keep quiet, like a good poker player, and not tip their hand to the American public. One of these days Trump and company will over bet in trusting the Russians not to punch back (and punch back hard) and the American people will be in for a rude awakening. They will discover that the Russians have a decided advantage over us when it comes to air defense.

A friend of mine who has expertise in these matters wrote me:

Any air defense engineer with a security clearance that isn't lying through his teeth will admit that Russia's air defense technology surpassed us in the 1950's and we've never been able to catch up. The systems thy have in place surrounding Moscow make our Patriot 3's look like fucking nerf guns.

Finally there is the matter of the Russians as a second rate military masquerading as a world power. Another friend who has spoken with military commanders in the CENTCOM AOR told me:

All of the knowledgeable aircraft commanders are usually scared shitless about the prospect of a legitimate air-to-air skirmish with a SU-30 or any Russian air superiority fighter.

But that is not what blowhards, like retired General Jack Keane, believe:

Russia's defense ministry said planes flying in Syria, west of the Euphrates River, would be considered targets after the U.S. Navy shot down a Syrian warplane.

The Syrian SU-22 had just attacked U.S. partner forces battling ISIS and was shot down by a U.S. F-18 Super Hornet.

Keane said on "Fox & Friends" he sees the statement from the Kremlin as more "talk" and "bluster" by Russian President Vladimir Putin.

General Keane is confusing restraint with weakness and incompetence. That is a dangerous and potentially deadly error to make. Russia, unlike the United States, has a very clear, precise strategy in mind with respect to Syria–defeat the rebels (Islamic and otherwise) and preserve Syria as a political entity. They have been willing to roll with some of our punches because they do not want to disrupt the progress they have made.

We are reaching a point now, however, where such restraint cannot and should not be taken for granted. Our intelligence analysts know full well the type of military capabilities the Russians have put in place in Syria. One can only hope that their briefings are not dismissed as "propaganda" because it does not adhere to the party line being pushed by a delusional Donald Trump.

This entry was posted in Borg Wars, Russia, Syria. Bookmark the permalink.