A Plethora of Events in Northwest Syria – TTG

Posted on February 19, 2018 by Andrei Martyanov

A plethora of events have hit this corner of Syria in the last week in addition to the grinding Turkish-FSA offensive in Afrin. That offensive has continued to nibble at the border areas and is now in a position to lay siege to the city of Rajou. Erdogan is feeling his oats. Speaking in his parliment on 13 February, Erdogan responded to continued US support for the Rojava Kurds and a CENTCOM spokesman’s recent threat to thwart any Turkish attack on Manbij.

“It is clear that those who say ‘we will respond aggressively if you hit us’ have never experienced an Ottoman slap,” Erdoğan told his AKP deputies in parliament. “We will destroy every terrorist we have seen, starting with the ones standing by their side. Then they will understand that it is better for them to not to stand alongside the terrorists.”

This talk made a definite impression on the Trump administration, if not on the distracted President himself. On 14 February SecDef Mattis and Turkish Defense Minister Nurettin Canikli met during a NATO Defense Ministerial meeting in Brussels. A DOD spokeseman said they met to reassure the longstanding relationship between the two allies. This was followed by a meeting in Ankara between H.R. McMaster and his Turkish counterpart. Tillerson then met with Erdogan without a State Department interpreter. In an unusual move, Tillerson relied on a Turkish government interpreter. This was a mistake. I think Tillerson was played by Erdogan. After this meeting, Tillerson explained:

“We want to coordinate how to stabilize areas together and who will occupy those areas. And the objective and intent is to return these villages, these cities back to the composition of people who were there before they were overrun by Daesh. So we’re going to address Manbij first. It’s one of the first areas we’re going to work on. The United States made commitments to Turkey previously. We’ve not completed fulfilling those commitments. Through the working group we’re going to address that, and Manbij is going to receive priority.”

This sounds like Tillerson promised to keep YPG/SDF forces east of the Euphrates as was promised long before the YPG offensive to take Manbij back in 2016. This can’t play well among the YPG fighters, YPD political leaders and the Kurds of Afrin. This is evident in the recent YPG pulling out of Deir Ezzor to reinforce Afrin, with the support of Damascus, leaving CENTCOM with the CIA trained, DOS funded former jihadis from IS and Al Qaeda called the Deir Ezzor MilitaryCouncil to confront both the IS and the SAA in Deir Ezzor.

There was another set of negotiations going on last week. Damascus and the Kurds were attempting to come to an agreement as to when the SAA will move into Afrin to defend the northern border of Syria and under what conditions that move will take place. The Kurdish position was that the SAA would only move to the northwest border with Turkey and act as border guards. Damascus wanted the full return of Afrin to SAR control and the disarmament of independent YPG forces. Kurdish fighters would become part of the SAA. The news of on-again-off-again agreements have been circulating for days. My guess is that the two sides are meeting somewhere in the middle. A Kurdish report (ANF) claimed that the Russians were initially obstructing these talks for some reason. Interesting, if true. The same sources, along with Elijah Magnier, claim the agreement talks about an eventual joint SAA-YPG operation to retake al-Bab and Jarabulus. Even more interesting. Al Masdar News reports NDF units from al-Safira are poised to enter Afrin within a few hours. I have no idea what other Syrian units might enter Afrin. The cream of the SAA is now concentrated outside Damascus to take the Ghouta pocket. Clearly any SAA military move into Afrin will be an economy of force move to forestall further Turkish incursions into Afrin and to separate the Kurds from CENTCOM and the Trump administration. It is a move of political finesse rather than military force.

Back on the ground, another ominous event is in motion. The Turks have sent several convoys into rural Idlib to establish positions that seem to be designed to block further SAA advances once the battle for Idlib recommences. There could be something to this. However, under the Astana Accords, Turkey is to establish a series of twelve monitoring centers throughout this part of Idlib. Given the recent advances of the SAA into the eastern part of Idlib, the prearranged locations of the monitoring centers do appear to be more a blocking action than a fulfillment of an agreement. The two maps below illustrate this conundrum. The one on the left shows the proposed Turkish zone in green, the Russian zone in blue and the Syrian zone in purple. The map on the right shows the current advances by the SAA into the Astana proposed de-escalation zone and the locations of the existing Turkish monitoring stations. I circled them for easier viewing. 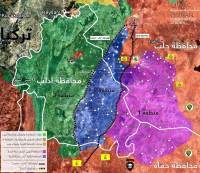 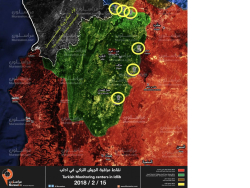 In conjunction with the establishment of these monitoring stations, Turkey resumed its financial support to the FSA and the Ahrar al-Sham Movement in northern Syria. This aid replaces the US program that was halted on 18 December 2017. Syrian experts expect that most of this new Turkish support will find its way to HTS and will be used to launch more attacks against the SAA in southern Idlib or northern Hama. These monitoring stations will be a convenient mechanism for coordinating the aid to the jihadis. They will have to be dealt with at some point in the future, Astana Accords or not.

50 Responses to A Plethora of Events in Northwest Syria – TTG