May Day in the City of Light 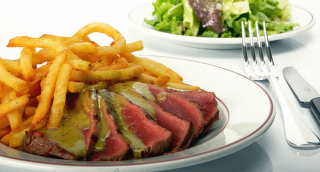 Traditionally a union-led day of action in the country, this year's event brought both the "yellow-vest" movement and so-called "black blocks" of dark-clad protesters onto the streets.

Some smashed shop windows and threw projectiles at the more than 7,000 officers deployed.

About 38 people were wounded, including 14 officers – one of whom was hit in the head with a paving stone."  BBC

The French National Police said today that they will uphold the right of protest in the face of riotous demonstrations in the street.  I applaud their willingness to do so.

But, the damned rioters have now gone too far.  In the film above you can see them raising hell in front of one of my favorite lunch places in all the world, the "Relais de l'Entrcote" in the Rue Marbeuf in the 8th Arrondissment or it could be in from of the Montparnasse branch of the restaurant.

The sliced steak served with a lovely butter/garlic/shallot sauce is just marvelous.

OK, Macron,  a national treasure is threatened.  Get your act together.  pl

This entry was posted in Current Affairs, France. Bookmark the permalink.

8 Responses to May Day in the City of Light