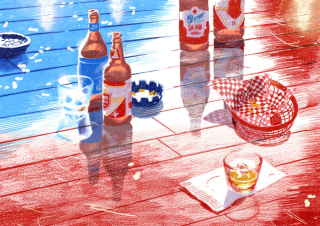 "In a less Gothic vein, bars often introduced me to the patois and subcultures of a region that was never one South. At a tavern by the railroad tracks in Donaldsonville, La., I was met by drinkers who seemed to speak a foreign tongue, except for the barkeep, who gruffly demanded to know if I was “a tourist or Yankee,” with an expletive for emphasis. When I answered “both,” he piled plates with spicy shrimp, chicken and boudin sausage — on the house, along with the beer — while patrons jovially tutored me on Cajun lingo and customs.

Olmsted had many such encounters, in an era when “ardent spirits” and “grog-shops” were so ubiquitous that even the landscape seemed tipsy to him. “The whole concern,” he wrote of a Virginia shanty, lurched to one side, “as if too much whiskey had been drank in it.”"  Horwitz in the NY Times

Mr. Horwitz makes an interesting observation reached as a conclusion after having "spied on the South" as he puts it.  "There was never just one South."  That is absolutely correct.  The First Families of Virginia grande dames in Richmond are just as haughty and indifferent to people not of their caste as their great grandmothers were in their treatment of Varina Davis, the Confederate president's "coarse" wife. Actually, she was nothing of the kind.  And these FFV ladies are about as different from shrimp boat captains in the Gulf as they could be.  BUT, both groups, in their hearts have much in common and despise the Yankees of today and their alien culture.  Horwitz found that to be true across the South before he returned to Martha's Vinyard to meditate.  And, as some Yankee on SST will tell us, the feeling is reciprocated.

Can the "better angels of our natures" clasp hands and embrace across the cultural voids that yawn all around?

I do not think so.

These days the cultural and political fissures are just as much "flyover America" vs. the Big City people as they are North vs. South.  CNN/MSNBC/NY Times/Washpost/Bill DeBlasio and friends  vs. everyone else.  The depth of these divisions are on daily display in the warfare ongoing in the media and politics.

The US as a state has always been a matter of compromise among competing interests.  The US Constitution was that and is that.  Those compromises are now rejected by the "city people" in the eagerness to dominate "the boobs" in much the same way that the North wanted to dominate the South in the 1850s.

It is now only a matter of time before the loss of the mortar holding the US together causes a general collapse.  pl

This entry was posted in History, Politics, WBS. Bookmark the permalink.

53 Responses to “Can Bar-Stool Democracy Save America?” NY Times