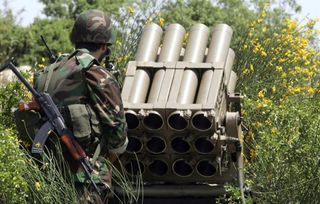 “That is a very, very dangerous development,” Kerry said. “Hezbollah is a proxy  for Iran. … Hezbollah in addition to that is a terrorist organization.”  Politico

Kerry can best be described as a primitive in foreign policy thinking.

Iran is a dangerous "enemy" of the United States because the US government acting under the "guidance" of AIPAC and WINEP says it is.

BTW, that is a Hizbullah soldier in the picture.  pl

This entry was posted in Iran, Middle East, Syria. Bookmark the permalink.