There should be a much smaller Detroit 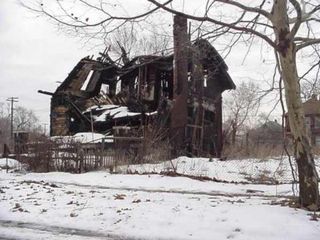 "And it shows: According to Mr. Orr’s report, Detroit has more than 78,000 vacant structures, 66,000 vacant and blighted lots, thousands of non-functioning street lights and a demoralized police force that takes nearly an hour, on average, to respond to 911 calls.
This is an unspeakably sad situation for Detroit’s 700,000 remaining residents, only a third of whom have jobs. It’s a crisis rooted deep within the history of a city that, for many years, rose and fell economically with the auto industry — while poverty, racial segregation, crime and official corruption festered.
Wisely, Mr. Orr focused not on how Detroit got to this catastrophic crossroads but on where it goes from here. He leavened his dire picture of the present with a hopeful plan for the future. It calls for a 10-year, $1.25 billion investment in public services that would remake Detroit’s institutions, root and branch. The only way to finance this plan for rebirth is to seek concessions — deep concessions — from the public-employee unions and private investors that have claims on the city in the form of pensions and municipal bonds."  Washpost

Detroit will not recover.  The statistics cited above are really reflective of a post-mortem situation.  To try to resuscitate the city is merely to pour good money down the drain in a vain pursuit of an industrial revolution that has deserted the place for more business friendly environments.

IMO, The state of Michigan should formally revoke the city's charter, seize what assets the city possesses and proceed to demolish large parts of the city.   Wrecking crews, grass seed and retraining programs for that portion of the city's remaining population that can be encouraged to relocate; These are probably a recipe for the rebirth of a much smaller town.

That kind of town could construct a new economy based on some form of enterprise that is essentisally unrelated to motor vehicles.  pl

50 Responses to There should be a much smaller Detroit