Is this the Ohio Grassman? 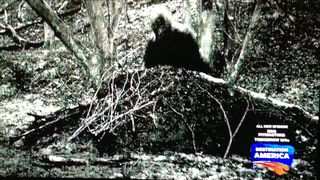 In the spirit our enduring lightheartedness here, ( I am weary of Egypt, Syria, Palestine, etc.) I offer you the spectacle of a hunt by "professional" hunters and trappers from West Virginia (something like Auvergne in France) for the supposed large bipedal primate known variously in the US and Canada as Sasquatch.  In Ohio it is the "Grassman."

This stalwart crew pursued the beast in Perry County in eastern Ohio, a place much like their own.  Their chatter abut traps, lines of least resistance, the need for running water, etc.  rings true to an old hunter.

Their adventure is recorded on the "Destination America" channel on a program called "Mountain Monsters."

Basilisk and I have decided to volunteer to join the group.  We would fit right in.  TTG and Alan Farrell could as well but would have to "fill out" some.  pl

69 Responses to Is this the Ohio Grassman?