Of Quarterbacks and Colonial Marines – TTG 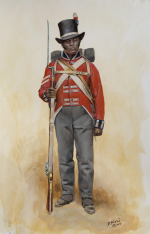 No refuge could save the hireling and slave

From the terror of flight or the gloom of the grave,

And the star-spangled banner in triumph doth wave

O’er the land of the free and the home of the brave.

These are the last four lines of the third verse of our national anthem. The same anthem that Colin Kaepernick will no longer stand for. He says he’s protesting the treatment of blacks in America. I have no idea if he is aware of these lines or their meaning. I only became aware of this through an article appearing in “The Intercept” yesterday. The fact that run away slaves joined the British to fight against their former American owners clearly chapped Francis Scott Key’s ass. The irritation from that chapped ass made its way into what became our national anthem.

Today I found an interesting article about this chapter in our history written by an Army chaplain. Naturally, as a chaplain, he turned it into a sermon… and a far too simplistic one at that. Nevertheless, the article is still interesting and informative.

On May 30, 1814, the Corps of Colonial Marines, a British force consisting of freed slaves, made their first amphibious landing of the War in 1812. Assaulting an artillery battery along Virginia’s eastern shore through a hail of enemy fire, the Colonial Marines performed better than expected.

“Though one of them was shot and died instantly in the front of the others,” British Rear Adm. George Cockburn wrote. “It did not daunt or check the others in the least but on the contrary animated them to seek revenge.”

In the end, they helped capture the battery and pursued their enemy into the woods before being called back to their landing craft and sailing to their base on Tangier Island.

I love to read history and I love to root for the Americans even when I am reading about a historical figure from another nation. However, in the case of the Corps of Colonial Marines I find myself not rooting for the Americans, but for their invading enemy, the British. This is because of two things that set the Colonial Marines apart in history.

Although they were of African descent and formerly enslaved, the British gave the Colonial Marines the same training, uniforms, pay, and pensions as the Royal Marines. A very interesting part of the story is the Colonial Marines not only exposed the hypocrisies of American liberty, but the British provided proof, when treated equally, these men could perform equally or better than their Caucasian counterparts.

“Do to others as you would like them to do to you,” the Bible recorded these famous words of Jesus, hundreds of years earlier.

The American slave owners neglected to follow this simple teaching, which drove the enslaved men to join the British. On the other hand, the British, who did follow this teaching, were blessed with powerful allies who helped them fight their way to Washington. The moral of this story is not only will you lose friends by mistreating them, but also when you treat people the way that you would like to be treated; you may gain friends who will stand by your side.

I have no doubt Kaepernick is sincere about his actions and his reasons for those actions. I am glad the NFL and his coach have stood by his right to take those actions. He must also stand by the consequences of those actions. But I also fully understand the reactions of many who are burning his jersey and now consider him a spoiled, ungrateful son of a bitch. I don’t follow football, but I’m happy that Alex Ovechkin, Russian to his core, respectfully stands during the playing of “The Star-Spangled Banner” at a Caps game in Verizon Center. I am pleased and proud that I am now authorized to render a hand salute during the playing of “The Star-Spangled Banner” at that same Caps game at Verizon Center.

What I do take vigorous exception to is the notion that I must cling to some all white version of Western civilization in a desperate attempt to save my white tribe from cultural oblivion. I’m proud of the many glorious social, cultural, military, scientific and technological achievements of Western civilization. They are magnificent. But I am not blind to its mistakes and shortcomings. There is no tribe out there with a monopoly on virtue, creativity, cruelty or stupidity.

On a more personal note, I resent the notion that my tribe cannot include all those black and Hispanic (mostly Mexican) soldiers I served with in the 35th Infantry. My rifle platoon was one third each black, Hispanic and white. The mortar section in my weapons platoon was almost exclusively Mexican and black. Surprisingly, tensions and fights were always between companies and battalions, not races. Yes, we were all members of our own respective ethnic tribes, but we were all willing to fight and die for our common tribe. I loved them as much as I loved my all white Special Forces Detachment and my extrordinarily multicultural SMU team.

To anyone who thinks I should fall in behind the banner of white nationalism or follow the hopping green hitler frog or whatever to save Western civilization, I offer the phrase taught to me by my first platoon sergeant, SSG Livingston, a black man, “Kiss me where it stinks, mutha fukka.”

P.S. If I was a better man, I would have found a quote from Pope Francis rather than SSG Livingstone.

Additional info about the Brits, the blacks and the War of 1812:

This entry was posted in Current Affairs, History, TTG. Bookmark the permalink.

176 Responses to Of Quarterbacks and Colonial Marines – TTG