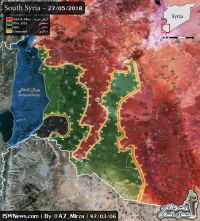 Several sources are reporting the arrival at an agreement among multiple parties that will leave Damascus and the SAA in full control of southwest Syria without the risk of a full scale conflagration involving Israel, Iran and the US-led coalition… and very likely Russia.

Russia and Israel have reportedly reached an unprecedented deal which would allow Bashar al-Assad’s forces to take remaining rebel territory in southern Syria - so long as Iranian fighters do not participate.

Moscow appears to have capitulated to Israeli demands to hold back Tehran-backed militias 15 miles from the occupied Golan Heights, according to Israeli and Saudi reports. In return, Israel will not stand in the way of any Syrian regime offensive on the city of Deraa and territory along the Israeli and Jordanian border.

Russia said on Monday only Syrian army troops should be on the country's southern frontiers, which appeared to be directed at Iran.

The deal is said to have been finalised in a phone call days earlier between Avigdor Lieberman, the Israeli defence minister, and Sergei Shoigu, his Russian counterpart. It averts a possible direct confrontation between Iran and Israel in Syria, where tensions have heightened between the foes in recent months.  (The Telegraph)

In a related article in “Newsweek” Russia and the US have agreed to the US forces leaving their base at Al-Tanf and have all rebels transferred to Idlib. In exchange the Syrian-Jordanian border crossings would be opened. All Syrian and non-Syrian militias would be withdrawn up to fifteen and a half miles from the Jordanian border. I assume the SAA would be stationed along this border.

This is a major win for Damascus and only a minor adjustment for Teheran. The Iranian affiliated militias still have plenty to do well to the west of Dara'a and the Golan. The only real losers in these deals would be the various jihadist rebels in the area. Without logistical and military support from Israel, Jordan and the rest of the US-led coalition, the rebels would have to face the best of the SAA on their own. Their choices are to seek reconciliation with Damascus, be shipped to Idlib with the rest of the jihadist leftovers or die in place at the hands of the Tiger Force and the rest of the flower of the SAA. The IS jihadists in the tri-border area will most likely die in place.

That Israel would give up their jihadist allies in exchange for a dozen or so miles of separation from Iranian backed militias and the IRGC indicates to me that they have no stomach for active conflict on the Golan front. Perhaps the last dust up in which the SAA fired back gave the IDF reason to rethink their long term strategy.