Show Me the Money! The SOTU Shutdown Showdown. …. by Fred

As Michael “I haven’t had a hit in years” Moore said, “Democrats need to Embrace Hollywood" to learn how to tell a story. Which is just what that Republican, Donald J. Trump has done. I think he’s  been hanging around with a different part of Hollywood though, the one Democrats can’t keep up with. Here he is channeling his inner Kanye American

As he’ll be the first to say, it’s just a little $5.something billion. Speaker of the House Pelosi did offer 20% of that, for NOT a wall, insisting we better call it somehting different. You read about that Pelosi offer back in December: WAPO  Since we can't call it a Wall, here are a  few naming ideas: a Barack Barrier, a Pelosi Partition, a Schumer Separator. Maybe we can rig up a poll, if you know what I mean, to settle on a label.

Then things closed up for Christmas. Speaker Pelosi vacationed in Hawaii. President Trump addressed the nation on January the 8th. 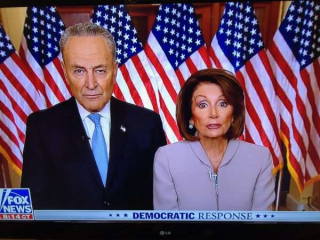 Wow.  To quote a line from Tinsel Town. "You see more cheer in a graveyard."

Now just what did the newly elected Democrats do after that Pelosi positioning on funding the wall and shutting down the government? Why the most important thing possible; They got, as the Mayor of London would put it, Beach Body Ready! 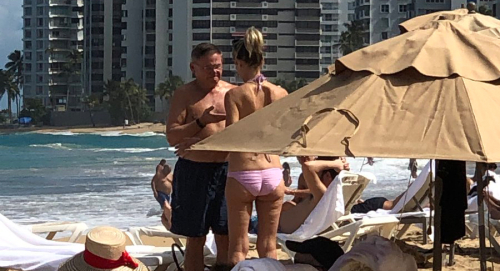 Nothing says helping Americans during a government shutdown like an all-expense-paid trip to a resort in Puerto Rico. A private jet, with 3 lobbyists for every House member present and a few more for lagniappe!

Congrats on the hurricane recovery Puerto Rico. If you are ready to entertain our representatives in Congress – and their lobbysts- at upscale resorts I'm sure all of those fellow Puerto Ricans on the mainland won’t be needing further assistance, will they? Good thing too since the government is still shut down and the Democratic controlled House of Representatives has, as you can see, higher priorities.

Why not hold the SOTU address, the one that informs the citizens of the Republic and their representatives in Congress of the actual State of the Union you ask? Because, according to Nancy Pelosi, she’s afraid. 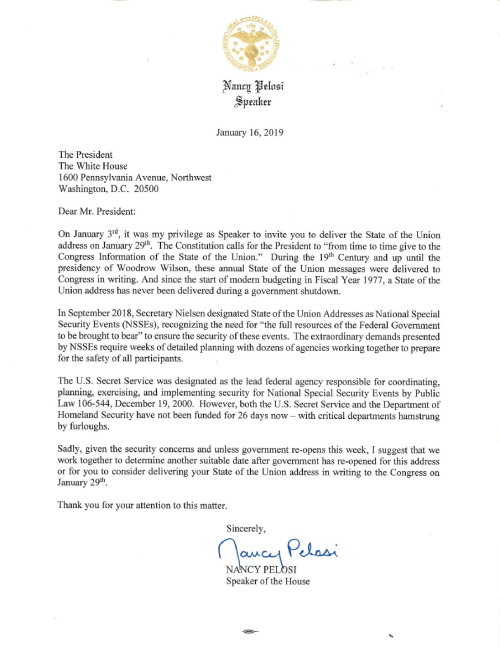 I guess the Metropolitan Police Department of the District of Columbia, the United States Capitol Police and the Secret Service –  combined,  just can’t keep congress safe.

Speaker Pelosi could always ask the former head of the DNC, Congresswoman Debbie Wasserman-Schultz of Florida, if that county whose citizens she represents can send their best to help out. 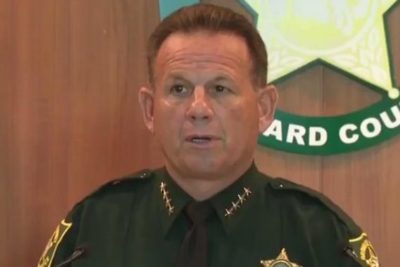 Now if you are like me you might be wonder, when did Nancy Pelosi become the Senate Majority Leader as well as Speaker of the House? I hope Senator Schumer can remind her that elections have consequences and the Democrats lost seats in the Senate. I'm curious to see if Senator McConnell of Kentucky will invite the President to give the SOTU speech to the Senate and give an open invitation to the House to be guests of the Senate. I wonder what they will all do when President Trump mentions border security and lobbyist paid vacations in the sun while the government is shut down? Polite and respectful applause I'm sure.

Time, ever relentless, marches on. Was it only yesterday, day 27 of the shutdown, that Trump, well, did what Trump does best. 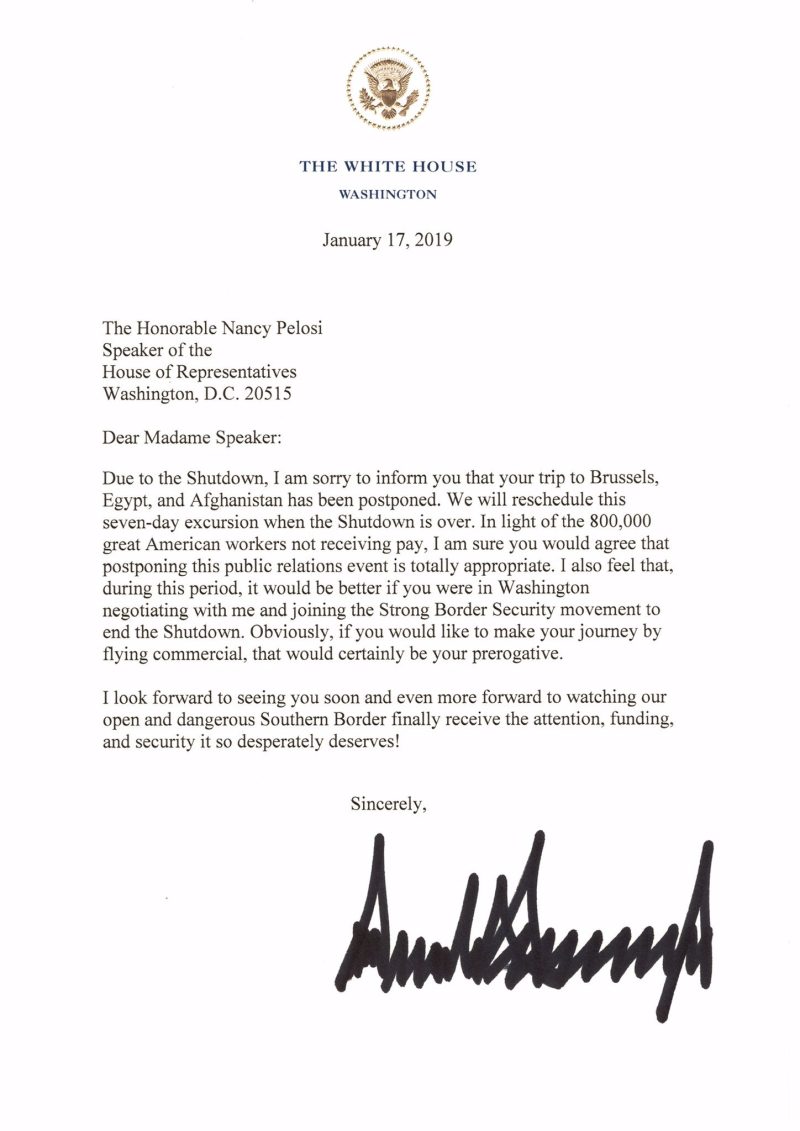 I know what you’re thinking. Oh no, he didn’t go there! How dare a billionaire tell a multi-millionaire she can’t fly on a seven day junket via military jet; but hey, she can pay her own way if she feels like it. President Trump, all ‘back o’the Airbus’ to an elderly woman. Wow. I feel your pain members of congress, really I do. Orange Man bad.

At least they sent the bags back. I know a few airlines who could take a pointer from that move. 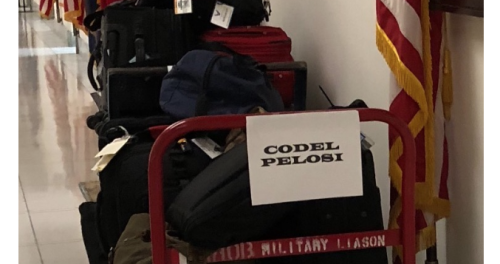 You know who else won't be going to listen to apparatchacks of the Brusslesproutitbureau tell OUR representatives in Congress they need all those billions of OUR money?  Little Adam Panzerschiff. My, history repeats itself, ey congressman?

Don’t worry Democrats. Senator Menendez of New Jersey knows some lobbyists who’d love, love, love to give each of you an all expenses paid trip to Brussels, Egypt and Afghanistan. I’m sure that just like former AG Lynch they’ll only talk about the grandchildren and not -cough cough- how much money they’ll send back to your districts if you just pass their pork-barrel projects. Like you those lobbysists know that money is needed for security in Afghanistan, Syria, Ukraine, and every European country in NATO. But by no means can make adjustments to find $5 billion for a barrier to keep America as safe Nancy Pelosi is when she's back home in her walled estate in Napa. Can't fund that. Walls only work when they suround the homes of oligarchs or are built in nations with borders. 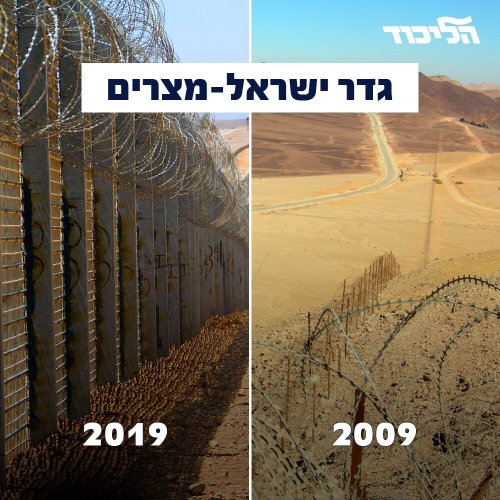 I wonder who paid for that border barrier?

Speaking of  travel, even if you haven’t done any in the last few days, I’m not sure you’ve seen the news of how the Shutdown Showdown has affected things. Why even TSA has problems.

Ain't flyng through JFK grand?  Nothing says “support the government employees” quite like loud rap music in a mandatory security line. Way to go garnering support for your position government employees. Meanwhile in Sanford Flordia, best known as the former home of Trayvonn Martin,  the airport has no loud music or long lines according to tonight's broadcast on WESH2. Why is that? It looks like its because privatization works? My, my. Better not tell Trump that.

Today is day 28 of the shutdown showdown. You know what that means? 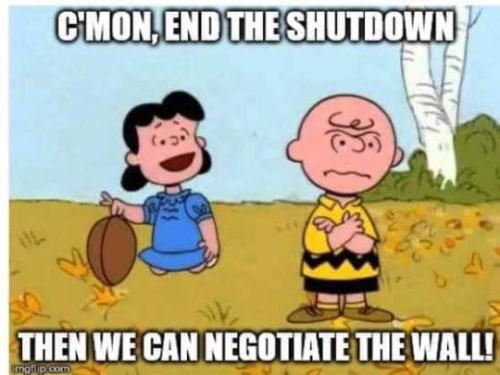 Think he'll take that deal, Nancy? I'm sure you think so. Congresswoman, now that it’s obvious to everyone, let me quote Hollywood’s most famous admiral:

I wonder whose core voters are most impacted by not working? According to one beltway news outlet, 800,000 federal employees and 4.1 million contractors are affected. Five million people. Wow, how much do they cost us and what do they do? Better not ask. I wonder what congressional districts they work in? I'm sure I don't want an answer to that question either.

According to Forbes half the wealthiest counties in America surround, ahem, the Emeral City that is the District of Columbia. You know what that means? They all need a raise for the good work the do! Ha ha, just kidding. They are all a paycheck away from poverty! My, my our best and brightest never learned to save like a deplorable. Imagine that. On a bright note local government is ready to help, "… staff can assist callers in Amharic, Arabic, Dari, Farsi, French, Hindi, Italian, Korean, Pashto, Punjabi, Somali, Spanish, Swedish, Tigrinya and Urdu." Swedish and Urdu, nothing says America quite like a US Government employee who needs financial help in her native Urdu.

I wonder whose voters are figuring out that if we can go a month without 25% of the federal work force – a group that has missed just one paycheck so far –  just how much of the federal government can we do without for good?

Two more days to go. Then…….. perhaps it is time to just RIF them all. Yes, a reduction in force of government workers. Let me take a snippet off the article at that link:  “Reductions in force furlough regulations and SES competitive furlough requirements are not applicable to emergency shutdown furloughs because the ultimate duration of an emergency shutdown furlough is unknown at the outset and is dependent entirely on congressional action, rather than agency action,” OPM guidance reads.

Umh, it might be a news flash for you OMB, but you work for President Donald J. Trump. He just may, soon, give you the official updated Executive Branch of Government guidance. Feel free to refrer to the Constitution rather than to beauracrtic mumbo jumbo to verify his authority to do so.

I know what you are thinking. We can't do that. You know what would happen if the government let go of tens of thousands of employees and millions of contractors – the kind of people who can't save up  a months pay and need financial help in Urdu, Swedish and Pashto?  From the news it looks like long lines and loud rap at JFK and no problems with airports that have private security; the same kind Bloomberg, Gates, Steyer and a slew of other non-predatory capitalists have. If private security works for them why not for us? Of course it might help to look at just what Agencies have the highest percentage of employees furloughed. 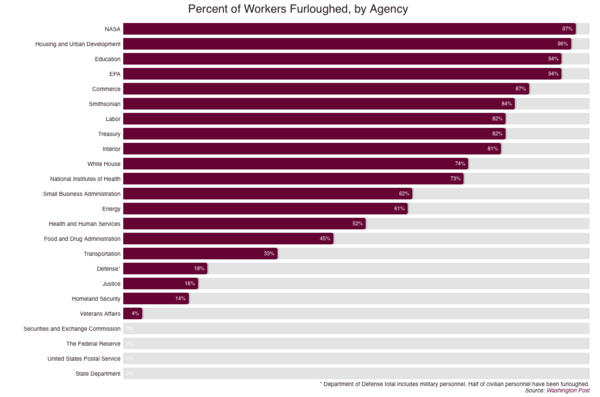 First on the list: NASA.  Why not have SpaceX and Blue Origin run the launch site at Canaveral? Think of the money we won't need to spend.  You get the idea. 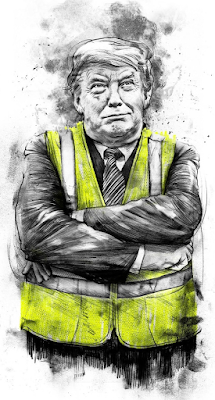 I wonder if he'll wear that to the SOTU address?