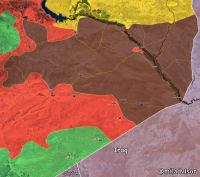 Shortly after announcing their de-escalation zone plan, the R+6 began their wide offensive to the east. It’s time for a review of operations and possible plans for future operations. We’ll begin with the a cogent and concise comment made on 27 June by alexandar.

Securing the Salamiyah-Resafa road is very important as it will reduce the Tiger Forces supply line from 225 km to 65 km. In case the Tiger Force goes on the offensive toward the Euphrates River, having a shorter supply line is necessary. That's IMO the only COA possible for the Tiger Force. All roads south of Rusafa are mountainous, with few to no possibility to bypass and take IS blocking forces by the rear. Akin of operations zones in Lebanon or Afghanistan where a single platoon can stop a brigade days after days and delay his move forward. It will be a long and deadly COA through these mountains.

– Center : 5th Corps to fix as much as possible IS forces to defend Al Suknah.

IS will have to fight on three different fronts at the same time with no tactical priority, each of these three offensives being able to end the Deir Ezzor siege.

It’s hard to argue with alexandar’s logic and reading of the military situation. I especially appreciate his analysis of the terrain between Rusafa and Deir Ezzor. The Tiger Forces are currently clearing the Salamiyah-Resafa road. They are now 15 to 17 km from doing so. A question remains whether they will close the gap and encircle the IS forces north of the road or allow them to evacuate that area before becoming encircled. Once that is done, the Tiger Forces will turn back to the east with the goal of interdicting the IS forces that are bound to leave Raqqa enroute to Deir Ezzor. I believe that COA would be more effective in relieving pressure on the defenders of Deir Ezzor than attempting the difficult route south to Deir Ezzor.

The IS salient south of the Salamiyah-Resafa road and east of Homs is now being addressed by another SAA offensive spearheaded by the newly reequipped and retrained Desert Hawks. A video of the Hawks arrival in the area just east of Salamiyah show a large number of T-90 main battle tanks and BMP-1s on tank transporters. There are also plenty of technicals including Toyota Land Cruisers and 6×6 trucks mounted with ZSU-23-2 guns. Accompanying the Hawks are the Military Shield Forces and National Defense Forces (NDF) in this developing offensive. This large offensive will force the IS to either remain/reinforce their positions in this area or pull back towards Deir Ezzor and cede close to a hundred IS-held villages that span across eastern Hama and eastern Homs. to the advancing SAA forces. Either option benefits the SAA more than IS.

On the Palmyra front, the 5th Legion and the 18th Tank Division continue their push towards Al Suknah. Progress is steady, but slow. IS forces have been fortifying positions along this most likely axis to Deir Ezzor for well over a year. The pressure will continue, but I, along with a few other armchair observers, no longer see this as the most likely axis for the eventual relief of Deir Ezzor. Nor do I see the drive to Al Bukamal and north along the Euphrates as the most likely axis. That run along the Syrian-Iraqi border to Al Bukamal will continue, but the populated area along the Euphrates is also strongly held by IS forces. It will not be an easy drive along the river.

I believe the most likely route for the relief of Deir Ezzor is northeast across the flat desert from the Humaymah-T3 area directly towards the hills overlooking the airport at Deir Ezzor. The R+6 seems to be reinforcing the success in this area with highly mobile mixed forces fully capable of taking advantage of the open terrain and lack of fortified IS positions. This video of the SAA taking of the Zenobia Desert Camp offers a superb glimpse of the make up of the SAA and allied forces engaged in battle in this area and the nature of the battle itself. 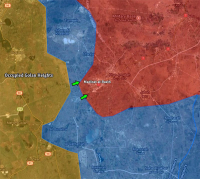 In addition to the broad offensive to the east, the R+6 is engaged with the jihadists formerly known as Al Qaeda at Quneitra near the Golan Heights. Here the jihadists launched a three pronged offensive to take Baath City a few days ago. HTS and the FSA established a new “operation room” and announced the start of operation “Road to Damascus” on 24 June. The jihadists in this area have received substantial logistical and medical support from the Israelis. Over the last few days, they have also also received Israeli tactical air support from IAF F-16s and armed drones. These air attacks were aimed largely against the SAA artillery positions in the area. I’m sure the IDF is also represented in the “operation room” established to support this jihadi offensive. After some initial success, the jihadists were beaten back by the SAA allied Golan Regiment and  Quneitra Hawks militias. Fighting is continuing at this front.

Throughout Syria, the forces allied with Damascus are doing well. The Russian program to reorganize and modernize the SAA and Air Force is bearing fruit. Iran and Hezbollah are playing a substantial role in this success. But the war is far from over. To the north, Turkey is still longing to establish a substantial presence in Aleppo and is making noises towards Afrin. I believe this threat is being addressed behind the scenes by Putin and Lavrov. They have substantial carrot and stick leverage against Erdogan. I don’t think they are hesitant to use either one. The Coalition will continue to use the Kurds in an attempt to partition Syria. I am also convinced that Putin and Lavrov are working behind the scenes to convince the Rojava Kurds to pursue a more reasonable road within a united Syria. What these two are saying to the Israelis and Saudis is also of great interest to me. All in all, I feel what’s going on behind the diplomatic scenes is as important as what’s happening on the battlefield to the future of Syria.

Aleksandar, my apologies for taking the liberty of making minor changes to your original comment. I trust I have not changed any of the points you made. Your command of the English language is “not so bad.”