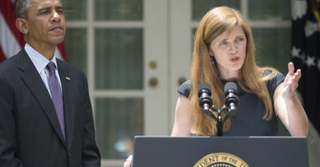 "… sovereignty cannot be a shield for tyrants to commit one murder. Or an excuse for the international community to turn a blind eye.
While we need to be modest in our belief that we can remedy every evil, while we need to be mindful that the world is full of unintended consequences, should we really accept the notion that the world is powerless in the face of a Rwanda, or Srebrenica?
If that’s the world that people want to live in, they should say so, and reckon with the cold logic of mass graves.
But I believe we can embrace a different future. And if we don’t want to choose between inaction and war, we must get better, all of us, with policies that prevent the breakdown of basic order; through respect for the responsibilities of nations and the rights of individuals; through meaningful sanctions for those who break the rules; through dogged diplomacy that resolves the root causes of conflict, not merely its aftermath; through development assistance that brings hope to the marginalized.
And, yes, sometimes although this will not be enough, there are gonna be moments where the international community will need to acknowledge that the multilateral use of military force may be required to prevent the very worst from occurring."  Barack Obama

This was basically a hectoring lecture given to the leaders of the world by someone who sees himself as their "daddy."  BHO laid down the law to the rest of the world and asserted that the United States, although slightly chastened by the experiences of the last decade still clings to the notion that it is the "big kid" in the school yard and that what we say "goes."

It was very much an R2P talk.  Looking at Ambassador Powers seated at Kerry's side I wondered if she and Susan Rice wrote this diatribe.  I am struck by the tone of the thing.  I imagine that this is a speech that his mother would have approved.   Rice, Powers and Slaughter seem very like what I imagine Obama's mother to have been.  I wonder if HC would keep them in her first term.  pl