Where’s Waldo? – A Followup to Special Forces in Rojava 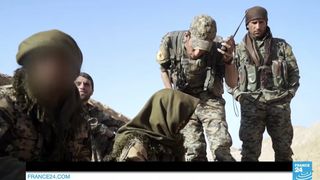 The France24 film I linked to yesterday documented the presence of “Western special forces” at the battle of Shaddadi. Upon closer examination I have concluded that the bulk of the helmeted soldiers caught on film are an Air Force Joint Tactical Air Controller (JTAC) team. There are a few others in mufti who strike me as special mission unit (SMU) types with lots of whiz-bang gadgetry. They look more like “operators” rather than Special Forces soldiers. As Colonel Lang pointed out with his marvelous comment, “I wonder which martinet ass is making these GBs dress that way rather than like the people they are with.”

I was still looking for the mythical Green Berets in the documentary. I think I found them in this screen shot at the 10:32 point. It appears to be a command group. The soldier with the radio is wearing a YPG arm patch and is missing his right hand. I assume he is a YPG fighter. One of the faces is blurred out. One is well hidden by a keffiyeh reading out map coordinates to the YPG Kurd with the radio. Those two appear to be Green Berets in their natural habitat. There’s nothing flashy or high-speed about them and they’re dressed like the men they’re advising. The soldier standing with his hands in his pockets on the right could be either. His face isn’t blurred out, but he has that look with which I’m very familiar. I’ve seen that look in many team rooms and training camps. Perhaps it’s a private joke among the team that the film crew took him for a local rather than a Westerner. DOL

This entry was posted in Current Affairs, Syria, The Military Art, TTG. Bookmark the permalink.

40 Responses to Where’s Waldo? – A Followup to Special Forces in Rojava