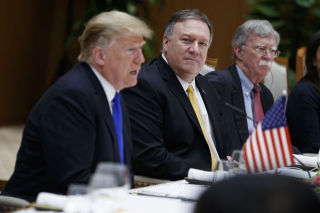 “Once he’s committed to a war in the Mideast, he’s just screwed,” said Lang of Trump.

But Lang, who later spent more than a decade in the Mideast, noted that Bolton has no direct control over the military.

“Bolton has a problem,” he said. “If he can just get the generals to obey him, he can start all the wars he wants. But they don’t obey him.”

They obey the commander-in-chief. And Trump has a history of hiring war-crazed advisors who end up losing their jobs when they get a bit too bellicose. Former UN Ambassador Nikki Haley comes to mind."

" In Lang’s view, anyone who sees Trump as some sort of ideologue is missing the point.

“He’s an entrepreneurial businessman who hires consultants for their advice and then gets rid of them when he doesn’t want that advice,” he said.

So far that advice hasn’t been very helpful, at least in the case of Bolton. His big mouth seems to have deep-sixed Trump’s chance of a summit with North Korean leader Kim Jong Un. And that failed coup in Venezuela has brought up comparisons to the failed Bay of Pigs invasion during the Kennedy administration."  Mulshine

Well, pilgrims, I worked exclusively on the subject of the Islamic culture continent for the USG from 1972 to 1994 and then in business from 1994 to 2006.  I suppose I am still working on the subject.  pl

This entry was posted in As The Borg Turns, Borg Wars, government, Middle East, Policy. Bookmark the permalink.