News Updates From Inside The Forbidden City

The heeling is heading our way. Over the last few days I took a little time off from the 'net. Caught a re-run of Rumpole of the Bailey. "The Golden Thread" that runs through English common law. Good stuff, not taught in school nowadays. Too bad, really. Then I tried to catch up on all the goings on, and boy did somebody kick over the chamber pot ant hill. I'm barely keeping up.

"Not since Abraham Lincoln was smuggled into Washington has anyone assumed the presidency of a more divided and angry nation than Joe Biden. He brings with him a satchel full of scandals and an agenda of mumbled promises. His pledge to be the great healer rings hollow. His recent dishonest comments concerning Trump’s advocacy of violence at the Capitol only proves the point." "The elites have no idea how angry millions of Americans are." Quotes from above article in "free Republic" (see the link). Boy, there are  some irritated people out there.

"Dear idiots, you’re like the wife with her arm in a sling and both eyes blackened telling her husband “Please don’t say anything to Joe. He’ll be mad.” Says woman and immigrant to America, now a citizen.  "The 2020 election was a fraud — and Congress including the Republicans — are cool with that." To quote another blogger.

Meanwhile inside the Nation's Capital ….. it is, to quote Rumpole, a question of rloyalty.

An unscalable fence is being errected around the Peoples' Palace of Democracy Capital Building. The reason is shown here in a file photo: “Yesterday was a horrible and shameful day in our history,” Said nobody in regards to the bombs planted by the woman in the file photo pardoned by Clinton and now serving on the board of directors of BLM. McCarthy said of the takeover of the Capitol.” Additional protective fencing for our loyal Senators and Representatives in Congress;  information is at this link.

Here we see the Danger! involved in that event that left zero buildings looted or burned, not even a shoe store:

Sorry. Those darned Russians again. You know what they did last election. Too bad they couldn't cover that story like CBS did. Or even the Associated Press. Did you notice there were no police shooting of protestors then? That was the perfectly acceptable storming of the US Capital. This is the one that terrorized those loyal to the incoming corrupt election rigging administration.

Here it is, and terrifying too: 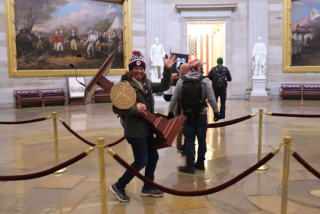 LARPing protestors staying inside the ropes. 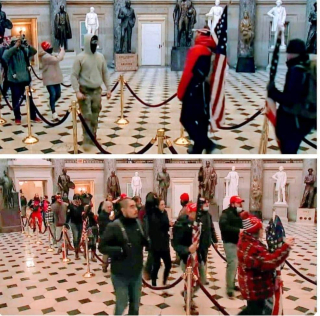 Terrifying.  Our fearless leaders, ready to send troops to Syria, Afghanistan, Iraq, Africa and the borders of Russia (not to China though, that might upset the Big Guy): 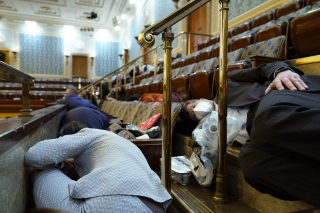 "We have Congress critters being hustled in panic down the escape hatch and out through the tunnels for their own protection… from outraged American voters." As one blogger put it. How DARE she say that. Here's the words of provocation:

How dare he say punch back twice as hard we are determined to defend and preserve the government of the people, by the people, for the people. Here we see how acceptable peaceful protests take place: 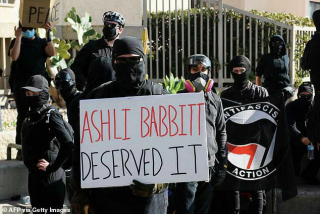 Peaceful protest by unorganized and unled Antifa. Who have no outside form of funding (and are a myth according to Biden) before Wednesday's scheduled rally in Portland. The House of Representatives, led by Speaker Pelosi, has its own security detachment and refused additionl federal security. Let me quote some of our national leaders on protests: 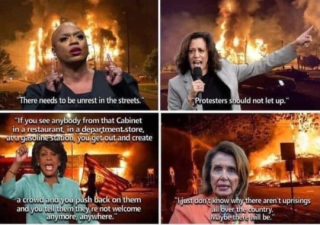 Those didn't age well. Rember though, police protection is for those who deserve it, as you saw in NYC.

Here in the Forbidden City we see members of the elite Praetorian Guard secret service and local police escorting a smiling member of the loyal senate past angry rabble voters alledged to be involved in the mostly peaceful protests Wednesday.

There are going to be consequences for those actions; I'm sure there will be equal justice under the law, like we saw out West: 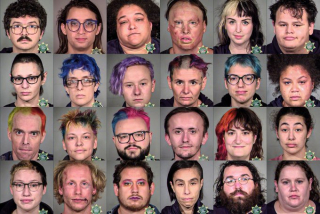 Small random selection of those arrested in Portland at BLM-antifa riots and violent protests in 2020. More than 90 percent of the 1,000 plus cases have been dropped by the prosecutor. Do you remember how many protesters from the Trump inaguration in 2016 were brought to trial?

Meanwhile the head of the flight attendants union says 'rioters' should not be allowed to fly. Rumours are that some are already on the No Fly List. I wonder if any are Muslim?

On other great news, Mozilla, maker of FireFox, says: This week we saw the culmination of a four-year disinformation campaign orchestrated by the President.  Four whole years? I wonder why no one told us. I'm looking @ you NYT. If only Congress had known. No worries for the future, Mozilla is getting ready to launch operation "little red book" to reeducate the masses. To quote them:

"By all means the question of when to deplatform a head of state is a critical one, among many that must be addressed. When should platforms make these decisions? Is that decision-making power theirs alone?"

I wonder what other heads of state are thinking regarding their ability to communicate with their own citizens and if that ability should be in the hands of an American company listed on the NYSE/NASDAQ; one that employs thousands of H1B visa holders whose loyalty is unquestioned by corporate management. No word on how loyal they are to the USA, or any other country; or if any of that is going to affect shareholder valuations either.

"Changing these dangerous dynamics requires more than just the temporary silencing or permanent removal of bad actors from social media platforms. Additional precise and specific actions must also be taken:Reveal who is paying for advertisements, how much they are paying and who is being targeted."

Find your own way over to their blog, no need for me to help them.

Yes, it's a question of loyalty. Like when multiple news organizations and social media companies suppressed news about Hunter's Ukraine income and his family's China connections. None of those who suppressed that news have been deplatformed.

Parler has not only been deplatformed from the Apple App store, it was deplatformed by Amazon (AWS), and their email provider, and their lawyers.  "Additional precise and specific actions must also be taken:Reveal who is paying for advertisements, how….." said Mozilla, and it looks like a number of people followed instructions.

That’ll keep them in line. Notice the narrative of the media that kept us informed of the mostly peaceful blah, blah, blah all summer long?

Further breaking news, from the evil lord of evil or whatever name he goes by:

"A group of developers latched onto the Press Release that Twilio put out at midnight last night. ….Turns out it was all of the security authentications that were used to register a user. This allowed anyone to create a user, and not have to verify an email address, and immediately have a logged-on account…. Well, because of that access, it gave them access to the behind the login box API that is used to deliver content — ALL CONTENT…."      RTWT

Has your company been declared Non-Essential due to the China Virus, by Google, Mozilla, guilt by association by those you are paying to provide you a service? How does your bank feel about your social media score? Yes, China's policies are comming to America, and it won't look like that Eddie Murphy movie either. I can't wait for Kamala and the creation of the Department of Hate – to monitor everyones speech to keep us safe.

You see, it is a queston of loyalty. If you are wondering where your government officials stand, just listen and look: 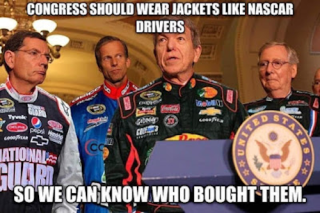 Now before you get too down, remember, Wednesday was the day we celebrate the Epiphany. Let this get you in the spirit. From the Governor of my former state of residence: 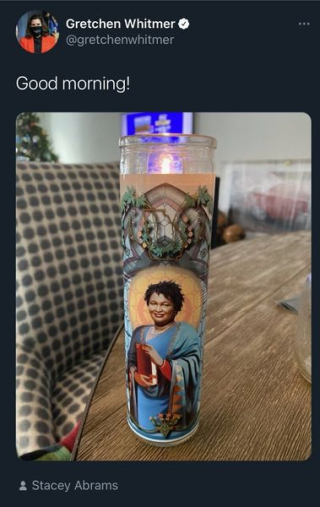 Well, I'm sure we won't be seing this:

Now if those don't inspire you remember this: I wonder whose resurection they will celebrate this Easter? Reporting from outside the walls of the Fobidden City, your correspondent, Fred.

20 Responses to News Updates From Inside The Forbidden City